The pottery, timbered, and mineral pots which were once used in ancient times by the monastery are found in the monastery’s museum. There are also the crosses, the old braziers, and ancient the lamps present in the museum. There is also a container that houses the relics of a group of saints that was transferred to a reliquary.

There are also some priesthood vestments, and a vest which belonged to the late Bishop Esak (who is the bishop of Bahnasa, Fayoum, and Giza), who he departed during the first year under the papacy of Pope Cyril V.

Other archaeological icons have also been found amongst others.  In addition, a round marble slab whose diameter about 70 cm was discovered.  There is an inscription on the slab that reads:

“Oh God of souls and God of every man, who trampled on death and descended into hades, who gave life to the world.  We ask you to give comfort to your servant Guirgis El Malik in a place of light and repose his soul in the paradise of joy, where pain, sadness have escaped.  Forgive him for every sin that he has committed whether by deed or thoughts, for you are merciful and loving towards mankind.  Forgive him, for there is no one who lives without sin.

Also in the centre of the slab, there are Nubian phrases written by Coptic letters. These phrases have been interpreted by Mr. Graft in the British Academic Studies Journal (volume fourteen). He said that they contained a prayer for King Gerges, in addition to historical statement about his life. He was born in the year 822(Coptic Calendar) – 1106 AD and his kingdom was located in the Northern Nubiaregion. From the above information, we can deduce how dedicated the Nubian people were to the church of Alexandria.

Fifteen years ago, a team of Dutch archaeologists arrived to work in the monastery. Their mission was led by Dr. Carl Enemy, under the auspices of London University in Netherlands.  They discovered many drawings in El Sourian’s Virgin Mary Church.  It may be worthy to note that those drawings were covered with a layer of clamshell for centuries prior to their discovery.

So it was necessary to create a building to save the drawings that were removed from the church after its treatment and rehabilitation. This building was completed in the year 2003, and it met all the required specifications under the supervision of Egyptian Antiquities Authority.

The Museum is located in the southwestern part of the historical monastery, and it is bounded - on the East- by the Syrian Church, and on the south, by the monks’ burial place.  This is on the northern side of the fortress, which is separated from the monastery a narrow corridor leading to monks’ burial place.

The Purpose of the Museum

The museum was created in order to preserve the transferred frescos from the Syrian Church after its treatment and rehabilitation.  After that, the frescos were displayed in the Museum in a somewhat similar arrangement as they would be in Church.

Architecturally, the Museum is designed to resemble the architectural design of Syrian Church, so as to ensure that the placement of transferred frescos would be similar to that of the church.

- Three half-domes of similar dimensions with those of the Church; main half dome, tribal half dome and western half dome.

- Two half-domes that are located in front of and aback the tribal half dome, there is a small dome in front of them with a level below, which   allows for windows for lighting and ventilation

- Three domes in the East of the Museum, the central dome with a higher level than that of the main and tribal domes.

The Museum contains: -
- Three main windows to allow for adequate natural lighting for frescos that are hanging around the three half domes.
- Four bottom windows with a wonderful architectural style that provides (saves) the indirect light the Museum.

- Two Small Windows in the East, which are decorated with authentic arabesque wood.

Frescos that have been transferred to the Museum

The Ascension of Christ Fresco has been transferred.  It was found in the western half-dome in the Church. After its restoration and in order to restore its beauty and its splendor, it was hung on the half dome that was built in the museum.

The Fresco that depicts the departure of our Lady the Virgin Mary, which was found in the half-dome in the first chorus of the Church. After its restoration and consolidation through the use of chemical materials, such as epoxy and fiberglass from behind, it was hung in the half-dome that was built in the Museum. 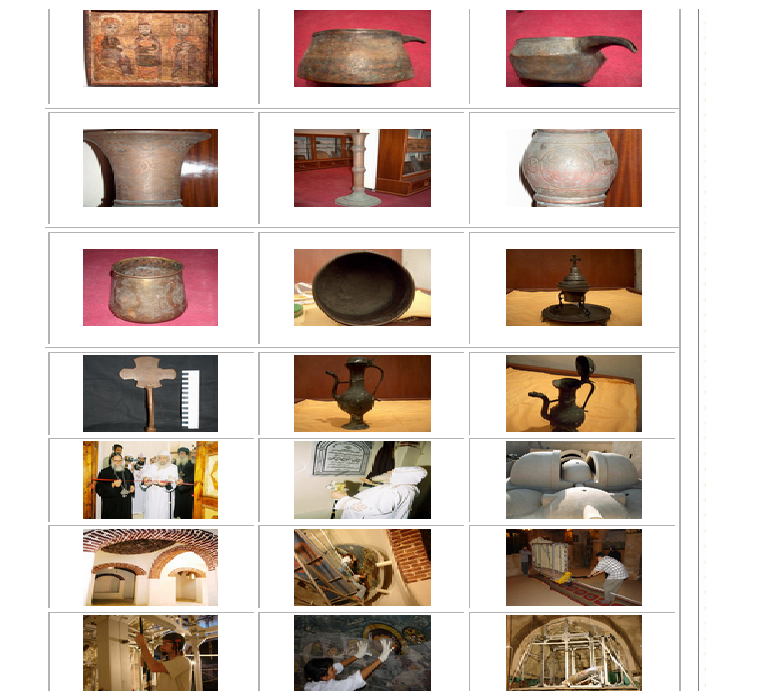